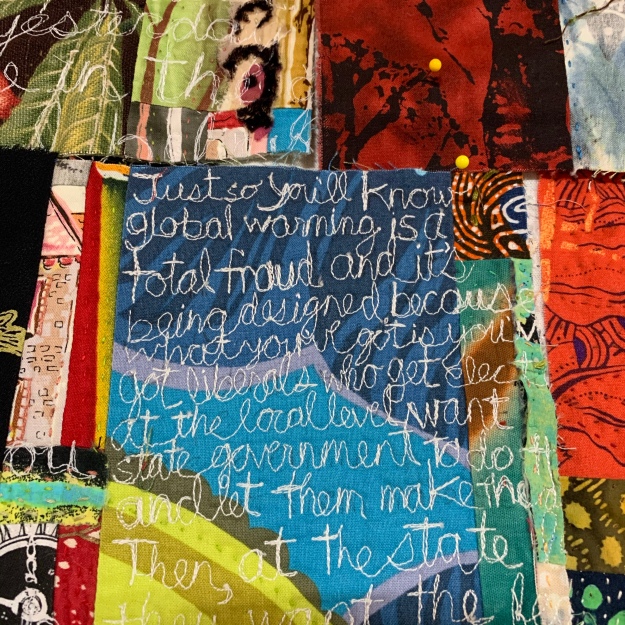 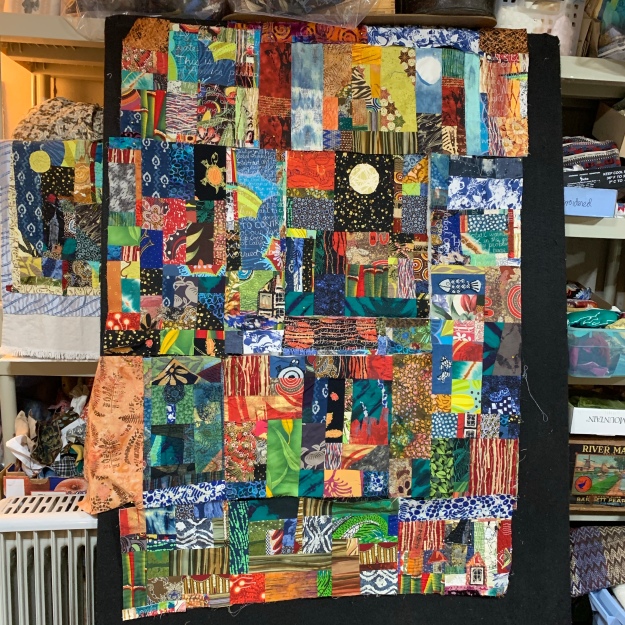 It’s 60 degrees here. Crickets sing their autumnal songs. Hard not to feel blessed, with zero hurricanes coming at us and zero fires raging nearby. 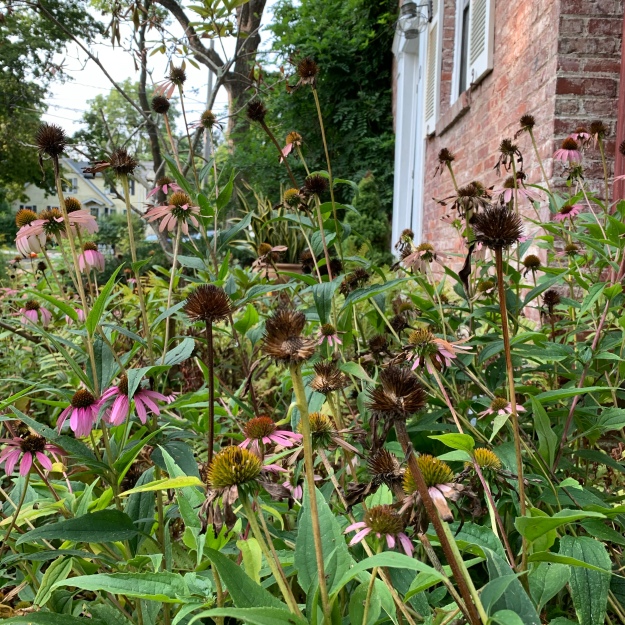 The finches are feeding on the echinacea seed heads near the side door. When I come out, they fly off, startled and pretty.

K went to work today for only the second time since March 13. There were 313 Covid cases in Massachusetts yesterday, so I don’t know? Finn understood the change and stayed up in bed with me.

I am adding batting to the single-layer sections of the global warming quilt. Tricky. Fussy in a way that would be avoided if I were a Point-A-to-Point-B creator. Believe me, sometimes I wish I was.

But just look at that amaranth! It is one of the few glorious results of my seed planting efforts this year. Exactly ONE of the dozens of sunflower seeds I planted survived the rabbits. 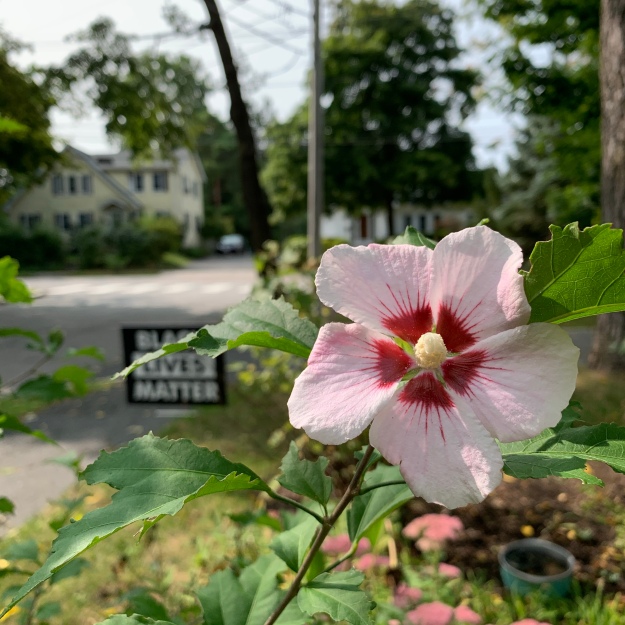 The huge squash leaves came from a rogue seed that took root when a piece of compost fell into a yard waste bin and took off! I love how surprises arrive in the garden with a casual regularity that defy their miraculous nature. 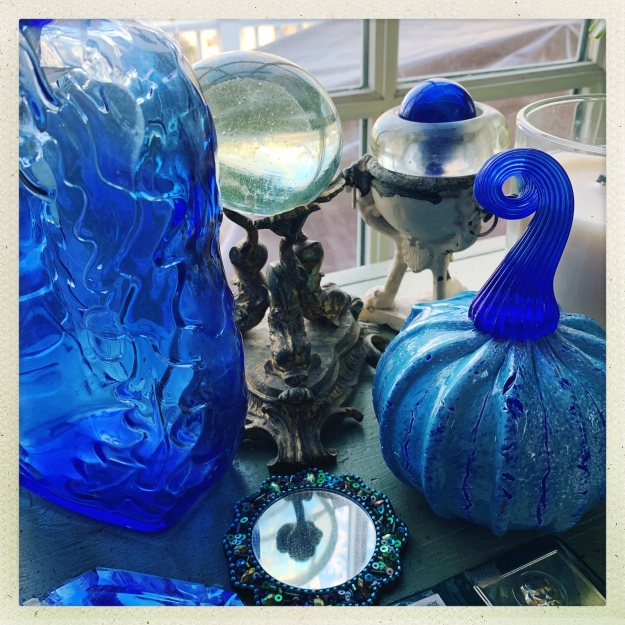 My sister’s glass collection catches the light. She died roughly this time last year. How grateful I am that she’s not here to panic and worry about the virus. She suffered from COPD, sleep apnea, asthma, CHF, and was on oxygen. Worse, because of her ever increasing need, people were constantly trooping through her apartment — sometimes five a week.

The entire time she lived in her subsidized housing (almost a year), she didn’t manage to trek down the hall to throw out any garbage. So, if she had dismissed everyone out of a rational fear of contagion, the garbage would’ve piled up in a matter of days, waiting for yours truly.

We were both spared. 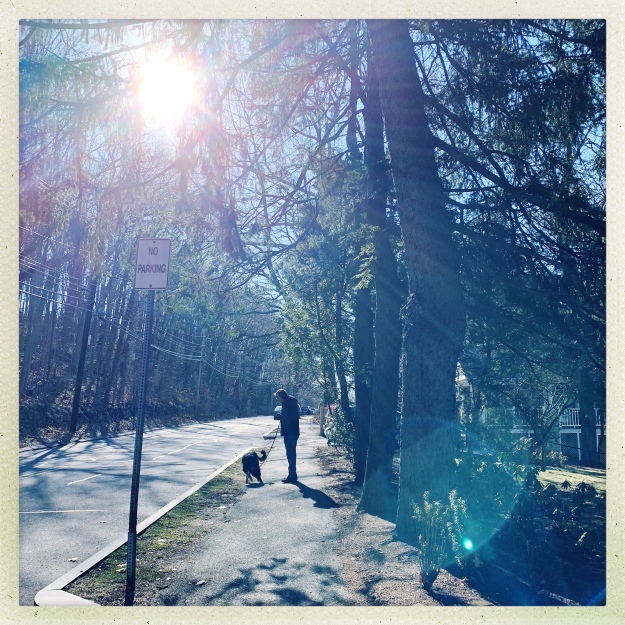 My brother refused to wear protective garb during the AIDS crisis, a decision both humane and medically supported in retrospect. It did make me worry, though, that maybe he wouldn’t wear protective gear for this crisis, either.

I needn’t have. It’s mandated. And he’s no idiot. There were 8 cases at Stonybrook Hospital during his shift on Saturday. His partner, also an ER doctor, is home with a cold. No fever.

Schools are closed here in the burbs of Boston until at least the end of April. Seventy-five cases in my county. Restaurants can stay open, but must remove enough tables to leave six feet between patrons. 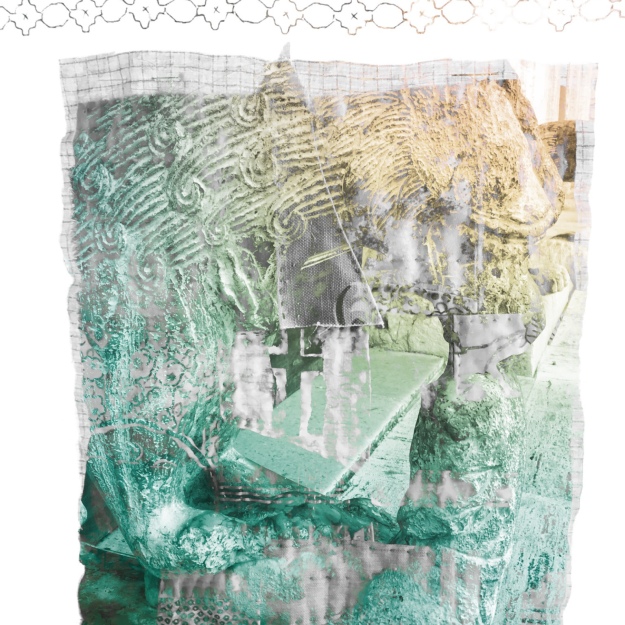 We are aggressively self-quarantining. K’s office got the order to work from home for two weeks. I have three things on Zoom this week.

K did go to the grocery store yesterday because we were out of bread and down to the last three eggs. At Wegman’s, there was almost no bread. Not a single bag of flour. And of course, the usual clear outs: Purell, TP, and paper towels. Thankfully, very few people were out at dinner time.

Woolworth’s has a good idea: setting aside a couple of hours a day for senior shopping.

I probably continue to read too much news, but counter it with restaurant competitions, Project Runway, and British or Aussie crime dramas.

Almost 3,000. That’s how many words I eliminated today. It’s incredibly satisfying to see the fat and cut it out.

When I posted a picture of this orchid on Instagram and said I had no idea what made it bloom (I know NOtHinG about these plants and it hadn’t bloomed for years), one follower said. “Probably because you needed it to.” 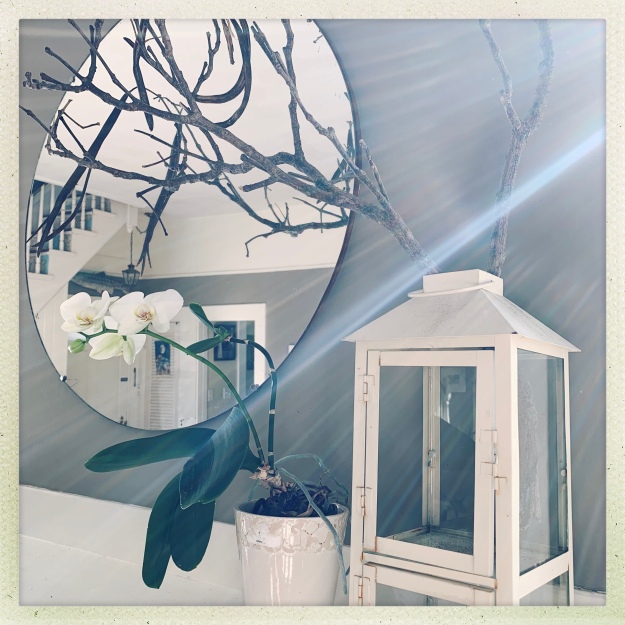 I wish for all of you to be well and maybe find a small miracle in your day.

I was born at dusk: 5:47. Sixty-three seems an impossible number but there you have it! It was a good birthday with ice cream cake, roses, “Little Women,” and calls from both boys.

(If you’re a parent to millennials, you know what a big deal a call is).

A string of grey grey days. I’m back to editing. Back to working on C’s quilt, which I am lap quilting in six pieces. Back to trying to ignore loud construction noise.

Today, the news unsettles me more than usual. Is it because we’ve arrived at that moment when a lawless leader has done so much damage to our institutions (think: the Senate, the DOJ), that he is, for all intents and purposes, a dictator? Nothing to hold him to account.

Please don’t tell me how little good worrying does — worry is not lessened by being made wrong for doing it! And, as you know, it’s not ALL I’m doing (though — HA! — I worry that whatever things I manage to do won’t matter enough to counter this tide of corruption). 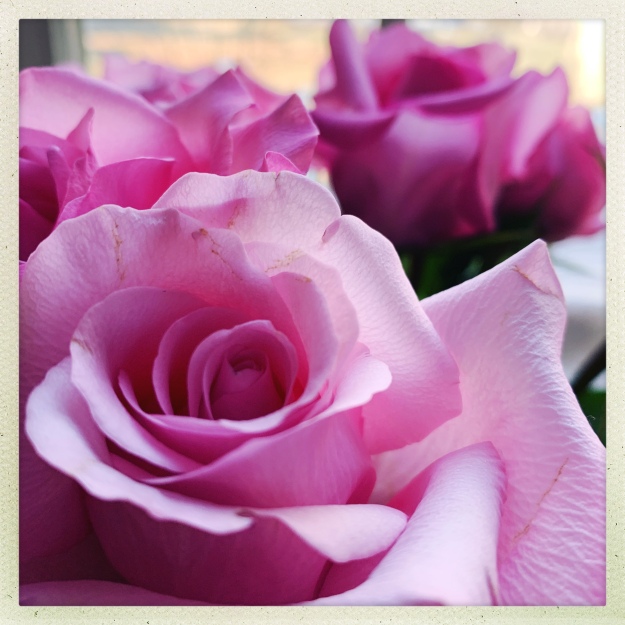 On the plus side, I read a piece by some pundit opining that whoever the Democratic candidate ends up being matters very little. Turn out is everything. Not the freakin’ swing voters. Turnout. Not the policies. Turnout. That idea takes a little pressure off finding exactly the right (electable) candidate.

The press, the House, and a huge majority are the last places of hope. 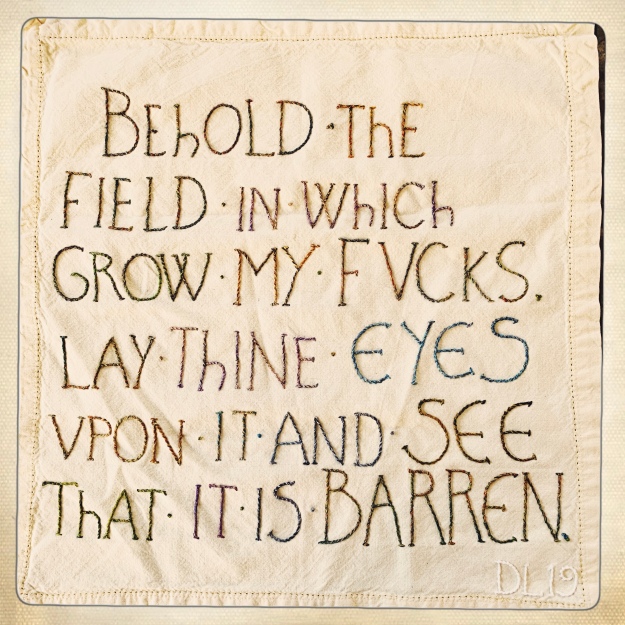 Feels an appropriate moment to share this lovely and suitably profane gift from Deb Lacativa. We both know it references not caring about who thinks what about our views. The caring about outcomes, about the future, runs deep.

And then there is this gift from Michelle. I’d sent her my banner from Mo’s project and unexpectedly, she sent me hers. I walk by it many times a day. It cheers me up! 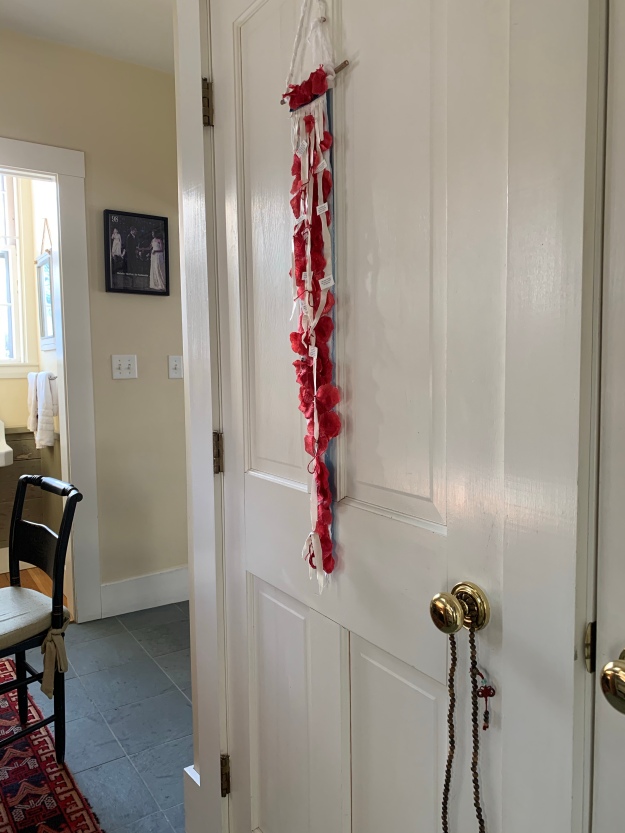 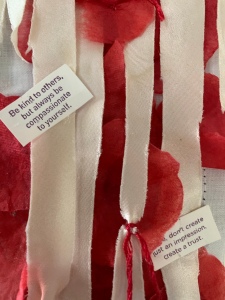 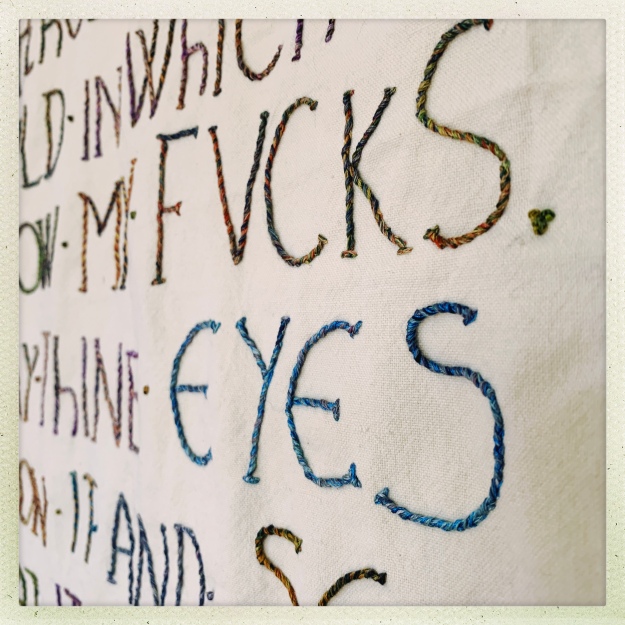 Lastly, thank you so much to all who took the time to read or listen (or both) to an excerpt from my novel. Thank you thank you. Your encouragement means more than I can say! 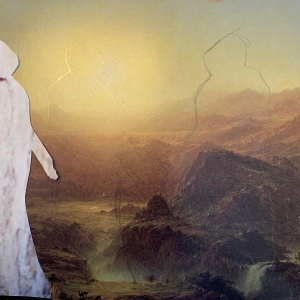 If you look for it again, don’t be surprised to find it gone. Publishers are weird about what constitutes publication so out of an abundance of caution, I will mark it private at week’s end.

Still in bed. Feel like I’ve taken on some of K’s jet lag. But my cold is gone.

Speaking of cold, yesterday I opened up the bedroom after cleaning, like I do. Turned the heat off. Put the fan in the window and switched it and the air purifier on. Meant to set a timer for 40 minutes and forgot.

Ooooh whee. It was 15 degrees here yesterday. Our mattress froze. 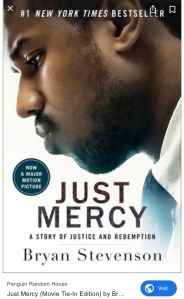 We’d just seen the movie about Bryan Stevenson of the Equal Justice Initiative, Just Mercy. I cried more than once and, I don’t cry.

After the shortest possible jog (because of the cold), we ate at Bernard’s — a Chinese place that used to be in the mall and now sits on an access road the developers dubbed, “The Street” (what can I say? It’s Chestnut Hill?). After I blurted out that K had been to China 55 times (it’s really 52), our waiter became very attentive. I drank at least sixty ounces of water, for as soon as my glass neared empty, there came Quan with a refill. Smiling.

Anyway: after reading Grace’s post, I realized my response to Acey’s “Find a talisman or protector” prompt needs a redo.

That hooded guy is a symbol and a powerful one but he doesn’t feel like mine, in a way. He doesn’t even feel INTERESTED in me. That’s part of the point of him, in fact. His eyes his view his witnessing go to much bigger things. Or smaller. But not personal.

PS I discovered while cutting out another outline, that by clipping the hood and shortening one arm so that the figure appears to be facing forward with her arms extended (in a gesture of MERCY, in fact), the figure goes from male to female.

Yes, once the female arrived, it was clear that the other is male. 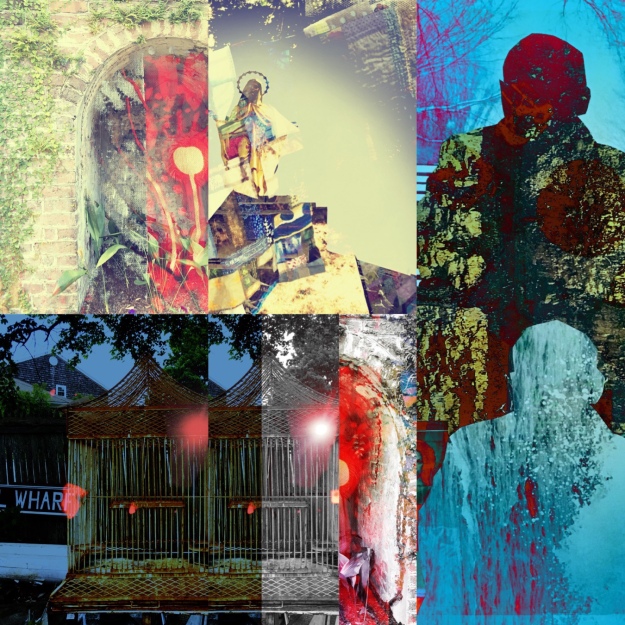 From a Medium article entitled, How to stay sane if Trump is driving you insane: Advice from a therapist.

“There are times when optimism is not appropriate or possible, and this is one of those times. Our President is delusional, lying, or ignorant; disastrous climate change and war with North Korea loom; marginalized people in our society are suffering. Faced with these calamities, catastrophic thinking is a rational response.”

“You may object, “But I can’t just forget all the terrible things going on!” You are right. Mindfulness is not about forgetting. It is about shifting focus to what is most immediate and most helpful. We help no one by staying in our anguish for long. Bernie Sanders said it best: ‘Despair is not an option.‘” 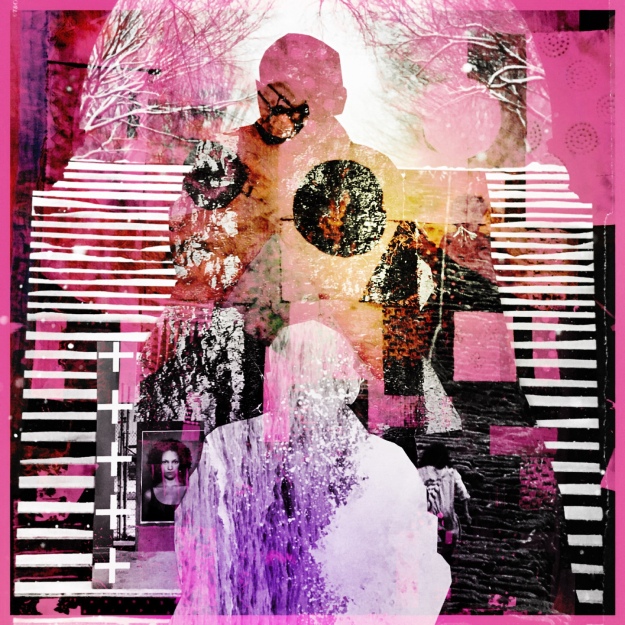 These are digital collages that I made at four this morning. They incorporate quilts and photos of collages, so the layers are numerous, sometimes past counting.

The images speak for themselves but to name a few: the virgin atop a cathedral near Assisi as well as an Italian stone archway, an antique bird cage for sale in Essex, Mass. Quilts on the line in the backyard, a woven cloth painting, and another close up of patchwork. A SoulCollage (r) card made from magazine pictures.

As usual, I used Diana photo app for double exposures and Prisma app to create mosaics.

Pattern and Outrage
Blog at WordPress.com.