Ever since the senseless murder of nine black congregants during a Bible Study circle at the Emanuel AME in Charleston, it has been hard to think of much else. It is sickening to realize that we now all have enough experience with these tragic events to recognize what could be called the ‘one-two-three punch’. First comes the awful, heart-rending racist violence itself. Second comes the media distortions, in which various denials and weird angles continue the racist harm. Third, we get to wait and watch for the possible failure of the political and judicial systems to prosecute or make a finding of guilt (or take down the Confederate flag). These very distinct kinds of harm overlap and blur into what for me is an increasingly intolerable state. What must it be for families of victims? For all African Americans?

Which is part of why I want to make a quilt.  It’s not quite the ‘fearless action’ I consecrated myself to in a Solstice circle yesterday, but it is not nothing either.

A nine block would fitting.  If each heart was secured atop a square of woven strips (in the style of and with techniques taught by Jude Hill), I think it would convey something about hope and love uniting us all – whatever hue our stripe.

Unlike the flurry and fury of my online activity (facebook and twitter), this would be a gesture with a little heft. What I have in mind is a modest wall hanging. More of a sympathy card than an heirloom quilt but still, something with literal and metaphoric heart… something that the members of the congregation in Charleston could touch and hold. That feels important to me. 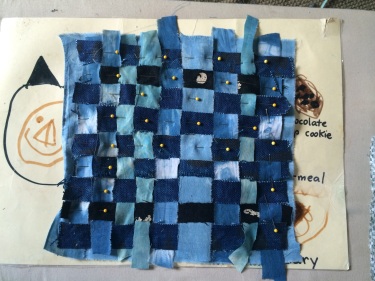 Anyone in?  I only need        ONE MORE. Thank you Sandi and Donna! And Ginny! And anonymous. And Dana, Mo and Gillan.

I hope so? #austinkleon #inspiration
Day two of #removaltrial #lookuptothesky #inmyneighborhood #hipstamatic
After nearly drowning, enslaved character Hiram discovers he possesses a mysterious power, a power which eventually serves his work on the Underground Railroad. We meet Harriet Tubman, or “Moses,” at some point, who shares this power and recruits him. Over the course of the novel, we travel from the depleted tobacco fields in Virginia to free black communities in Philadelphia. As the son of his owner, Hiram faces the complicated feelings and thoughts that come with that lineage. It isn’t lost on him that his half brother, the heir to the plantation, is a royal fuck up and unworthy of his station. The half brother dies in the very beginning which significantly changes Hiram’s father’s regard toward him as survivor (not enough to free him though). This is a good read: interesting plot and characters, historic details that feel authentic. High stakes. Two of my favorite aspects were: The descriptions of complicated white/black interactions. One of the central Underground Railroad figures, for example, is an aristocratic white woman who maintains an elaborate facade. The other thing I loved (really loved) were the descriptions of Tubman. Every scene she’s in really comes alive with her gravitas, her psychic abilities and her capacity to pull off one impossible rescue after another. Two slight dings: it was a little choppy in the beginning and I’m not sure I found Hiram’s love for another character believable or compelling until the very end. #readersofinstagram #reading #literaryfiction #historicfiction #slavery #tanehisicoates #goodbooks #whatareyoureading #pageturner #fivestarbooks
#digitalart #digitalpainting #collage