Two days ago, when I was editing a published post about the only Catholic prayer I still say and a little about travel by air, the phone rang. It was a persistent solicitor — a number I’ve been seeing every day for weeks. I picked up to politely request my removal from their list while simultaneously saving the post —

and the whole thing vanished. Not just the updates — all of it.

I walked away, resolved not to let negative narratives spin up around the glitch, but also without the energy for a re-do. The negatives arose anyway (was silence imposed because the post was braggy instead of vulnerable? was it too facile with the Catholic rituals? not remotely concerning what is truly and deeply on my mind?)

What IS truly and deeply on my mind?

Yesterday, the wordpress app on my phone seized. Geez! Haven’t I said, I’m not shutting up?

So by way of recap, here’s a little from the other day — I hope I never stop feeling a sense of wonder about being up in the air and seeing the coast lit up below. I hope the Virgin hears our prayers. I hope Mary’s mercy can guide me to learn more about the complicated landscape of South Carolina. Help me filter history through a tender and flexible compassion.

Here’s one surprise from my recent trip. The most restorative aspect of our visit to Charleston came from a major reduction in news consumption. Not the sun, the 70 degree temperatures, the incredible food or historic sites (though they were amazing, too). It was LESS NEWS. 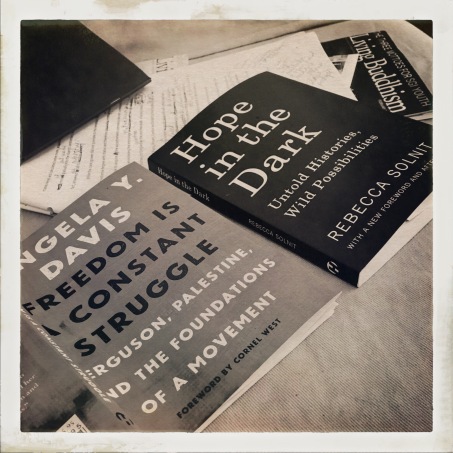 For wisdom about the business of balancing duty and lightness, I turn to Rebecca Solnit (“Hope in the Dark”). Even though since November I’ve had a hard time reading political commentary that predates the election, she will be an exception. She wrote:

“Joy doesn’t betray but sustains activism. And when you face a politics that aspires to make you fearful, alienated, and isolated, joy is a fine initial act of insurrection.”

Giving is an act of insurrection, too. Did you hear about the crowd sourcing that planned to raise $20k in a month for purposes of repairing the vandalized Jewish graves in Missouri? They exceeded their goal in THREE HOURS. Or about the million-plus dollars raised to rebuild that burned down mosque in Texas? Twenty-three thousand people contributed.

Closer to home, my city just voted to be a sanctuary city.

Powerful examples of our collective goodness absolutely abound right now. To stay sane, I really need to pay as much attention to them as I do to the ugly and dark work of the GOP.