And now for the incredible work by Dana of Raven and Sparrow.

One of the things I love about this quilt square is how it captures both the chaotic rupture of grief and the renewing power of hope. Look at the way Dana combined neat, orderly elements with loose and ‘messy’ ones.  The contrast speaks volumes.

The couched red threads on the left speak to blood, disorder, hate, and loss. They scramble and defy the cool, ordered grid below. The purple cloud of gauze has the visual feel of smoke or staining. It spreads across the surface and behind the heart. Looking at it, we wonder: is the damage done? How much further will it spread?

The heart is stained and rent. The edges of the central rip are frayed — in contrast to the neatly applied stitches that define the heart’s outer edges.  These skillful choices elevate the image to something beyond the cliche of the broken heart.

A five-petaled flower grows out of the place of brokenness and brings its purity into the messy tumble of red. It speaks to the enduring power of hope and also of forgiveness, an apt reference for a community living their Christian values.

Like Liz, Dana dyed her strips especially for this project. Not only that, but she used a resist to spell out the words, “open our hearts” — words spoken by President Obama in his eulogy for Rev. Clementa Pinckney.

Dana also used a resist to create a series of small hearts along one of the strips. She beautifully embroidered nine of them.

The floral embroidery in soft colors lends a sense of peace and purity to ‘the Nine’.  The pretty uniformity of these hearts stands in contrast to the wild chaos opposite. And, it’s something else.

It’s that this line of uniform and sweet encircled hearts suggest that in death, the Emanuel Nine became united — in faith and essence perhaps?

On the reverse side, with white thread on white linen, Dana stitched simply, “Remembering, June 17, 2015.”

All in all, this is a beautifully executed and powerful visual statement about loss and hope.

Please read more about Dana’s process, and enjoy her other beautiful dyeing and needlework and her extraordinary flare for table setting.

Thank you so much, Dana!

To read more about this project,
please refer to the the sidebar category:
“Hearts for Charleston Quilt”.

It is beyond gratifying to see how other fiber artists are responding to the call for The Hearts for Charleston Quilt. I will post about them in the order of their arrival.

Liz Ackert of I’m Going to Texas  sent the second square. Liz exemplifies what I really admire about makers of Slow Cloth — over-the-top attention to detail, composition, and color, skilled dyeing and needlework, plus tremendous thoughtfulness and love informing the design. I really encourage you to visit her blog and read about the process, because it’s fascinating! 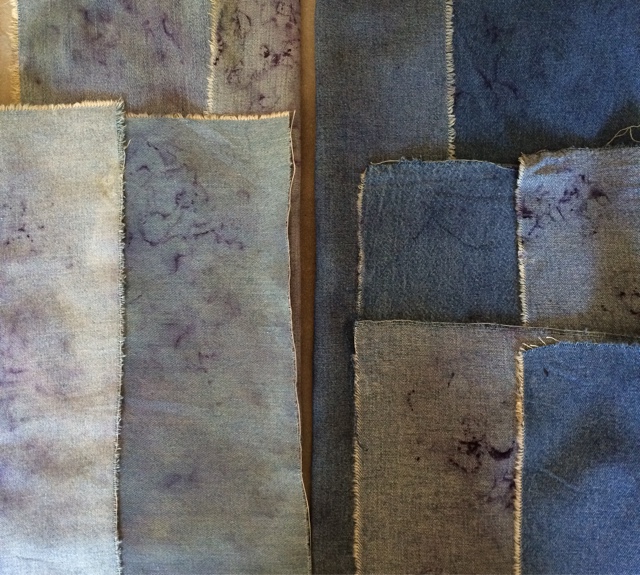 Interestingly, one of the plants she selected for dyeing is called, “Friendship sage (Salvia amistad … named “amistad” for “friendship” but also the name of a ship that was the scene of a slave mutiny).” [read about preparation of the cloth here and here].

Then, Liz embroidered the names of the Emanuel Nine* onto strips, along with each person’s occupation and age. This must have brought home the impact of the tragedy. Liz also stitched the date of the massacre in various red tones at the far right of each and every strip. That, too, must have been powerful, to stitch that date over and over.

stitching and photo by Liz Ackert

stitching and photo by Liz Ackert

Liz tells us on her blog that the Ethel L. Lance strip was reworked prior to the weaving

Because I hadn’t made a decision about the names and also because some gardening reminded Liz of Psalm 139 (about being made in secret and woven together), Liz was inspired to flip the strips over, rendering the names secret in a way.

There is something fitting and poignant about the names disappearing.

Then, Liz read many of the follow up news stories and was inspired by statements made by surviving loved ones. She selected one quote to correspond with each of the deceased and then stitched them to nine more strips. [read about these decisions and the square’s assembly here]. 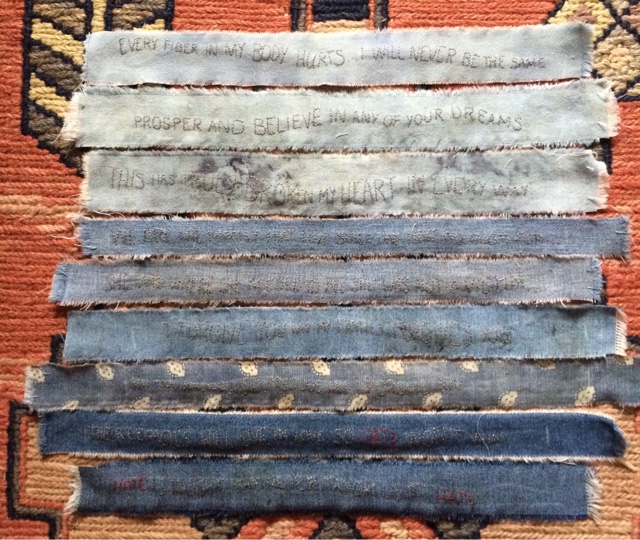 Here are those statements:

Every fiber in my body hurts … I will never be the same
Prosper and believe in any of your dreams
This has truly broken my heart in every way
We are the family that love built. We have no room for [hate]
She was where she needed to be … she was not a victim
I forgive you and my family forgives you
You took something very precious … and I forgive you
Their legacies will live in love so hate won’t win
Hate is taught … she never taught us to hate

As we all know, many of the utterances were remarkably and profoundly forgiving.

Weaving the strips interrupted most of the phrases. Liz made two exceptions. The astonishing phrase: I FORGIVE YOU.

And: BROKEN MY HEART.

She was worried that the word “hate” might end up visibly prominent but it was buried.

Liz initially felt an impulse to tidy up the denim heart (above) and then decided against it, letting its raggedy state stand as a symbol of the ravaged community instead. [read more here] The entire heart is composed of fabric cut away from the reverse applique heart (below).

The tiny pink “X’s” stand for the children left behind — there are twenty.

On the back, Liz stitched a beautiful label, and when attaching it to the square (partly to solve a buckling issue), it just so happened that it traced nine horizontal lines across the ecru heart.

Such a beautiful quilt square! It will be wonderful in another month to work at doing justice to it and the other contributions in making a single cloth for the Emanuel AME.

*I have consciously decided not to call the deceased “victims”, though clearly they were. I feel as though it diminishes them somehow and one of the survivors specifically stated she refused to think of them as victims. In places I refer to the group as “the Emanuel Nine”, following Liz’s lead.

To read more about this project,
please refer to the the sidebar category:
“Hearts for Charleston Quilt”.

I swooned opening up the first of the squares to arrive for the “Hearts for Charleston” quilt. Mo Orkiszewski from Sydney, Australia made this one. (She is a multi-dimensional artist who blogs at It’s Crow Time). These photos do not do it justice — can you see how beautifully detailed it is?

She cut red felt into open hearts and then outlined each with a thickly applied whip stitch that must have taken hours and hours to apply. Some of the stitches, she told me, were made while listening to President Obama’s eulogy for the Rev. Clementa Pinckney. Tears fell onto the cloth.

Delicate cross stitches and running stitches make, to this eye anyway, a map of sorts — all while connecting the strips and integrating the layers. Mo admitted to me that she had never quilted before.  How, in five years (or more?) of following her blog, I wondered, could I not have noticed? What an amazing first effort!

Some of the indigo, as well as the tiny white bird print, were gifts from Jude (Spirit Cloth). The birds represent the birds of peace.

From an email exchange:

the backing cloth is an indigo dyed “daylight moon” that I bought from Glennis Dolce (Shibori Girl) in 2013, the half circle edge of the moon was stitched from the back at first but it looked wrong on the front so I took out a lot of the stitches, then restitched them with the raw indigo dyed silk in the final hour because the organza held the memory of the moon edge and made that ridge  — the thought behind it is an abstracted heart with the 9 heart silhouettes forming the left hand side of the heart shape and the right hand side is the healing flow of the water of love that all hearts create

Do you see the row of wishbones along one edge? There are nine.

As someone with a special affinity for crows, feathers, and avian bones, Mo’s inclusion of bird bones was no surprise, and from her online photo, I thought they were REAL. It might have made sense — not just because of her affinities, but also because sometime last year I mailed her a baggie full of wishbones. Perhaps they are returning? I thought.

(No, as it turned out, and better cloth than bone for ease of construction later).

I love what they say here.. representing nine wishes for peace and healing for each of the nine deceased and their families, and perhaps also nine places for their souls to make wishes as well?

Her square will not be dedicated to one of the victims like the others. Instead, it represents the COLLECTIVE loss — the wound to Emanuel AME, and indeed, to the larger community.

To read more about the project, check out the category: “Hearts for Charleston Quilt”.

The project has taken on a life of its own well-beyond what I could have imagined. The email exchanges happening right now are not at all limited to housekeeping. It turns out that each participant NEEDED an outlet of some kind to express their heart ache and our emails have become places to share family histories, grief, and hope. I am learning so much and appreciating the participants so much! More on that down the road.