We had a wonderfully moody day of fog a couple of days ago. This morning is crisp and clear again and even, a little hot. After a terrible night’s sleep, I set out to walk at around noon and found my way to the Bosco di San Francesco (the woods of St Francis). It was all down and then up hill, but walking on dirt not stone came as a relief as did birdsong. The clip (if it loaded) is from a drumming performance in the square. Such a thrill to stand there and have the sound enter the chest. A kind of masculine synchronized fury. Less thrilling: they wandered the streets and played until midnight (competing with the middle school hooligans). This morning I woke to the sound of recycling pick up. Imagine a truck that lifts a bin of glass and dumps it into a truck bed ten feet down, also full of glass. A crashing cascade. It sounds like the end of the world. I’m not complaining. Am I? 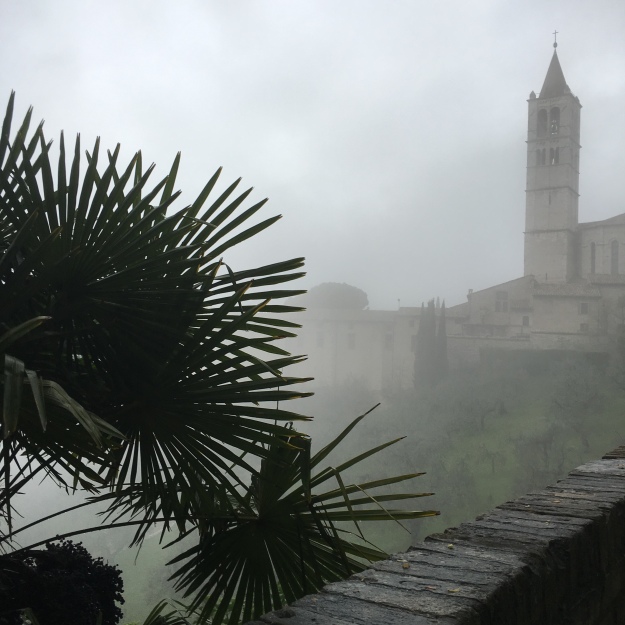 The door into the woods is in the middle of that long wall on the right (below).

An Assisi-inspired WIP. All hand pieced but with some areas of appliqué — what I call a hybrid approach. I got a little inventive to accommodate the design (and to work with limited scraps brought along on the trip), but also in response to having heard Jude say recently something like “technique is everything, really.” 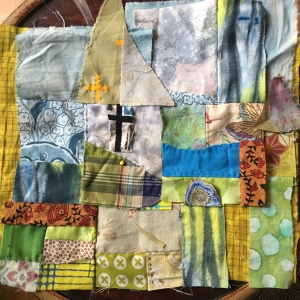 Here are some shots of Saint Clare’s alb. Ssh! Don’t tell. Photos were prohibited there (you cannot believe what scant attention people pay to those signs, BTW). I did not use a flash. 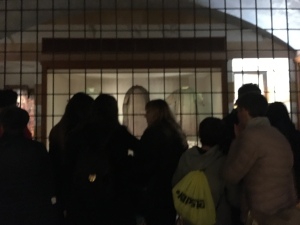 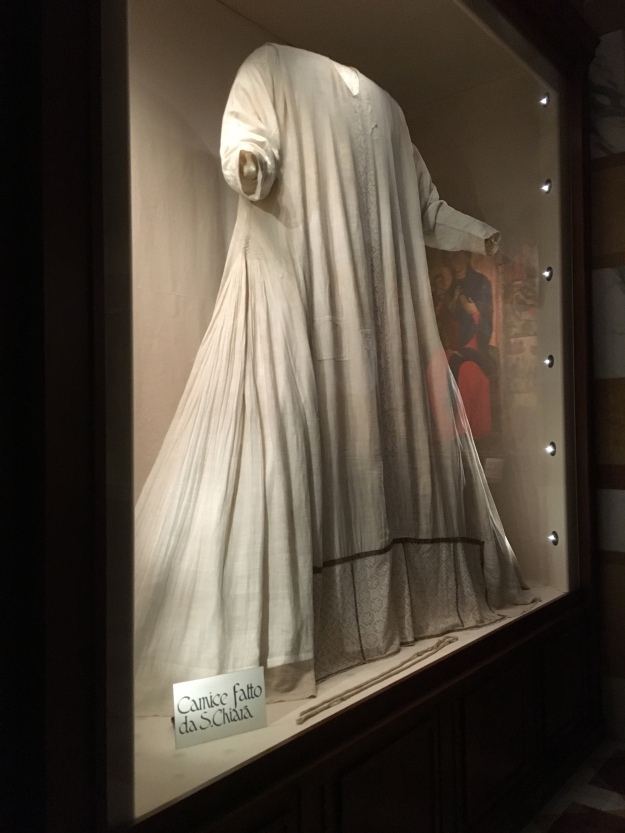 There is some beautiful pull-work down the middle which you probably can’t see. I wondered if Clare had been a giantess, because the gown is BIG. But no, my host said the style was for cloth to pool about the feet. Perhaps, too, some length was cinched up by a simple belt.

This picture, from “The Little Flowers of Saint Clare,” tells of the time when Clare came up off her sick bed to raise the monstrance to pray for the sisters, who were defenseless to an advancing army of Saracens. She then prayed for then soldiers, too. A sweet voice came out of the object (“because of your love, I will watch over you and them always”) and the army changed course and went elsewhere.

Below is her cathedral. The alb is housed in a reliquary on the lower level. She’s buried on the level, too. 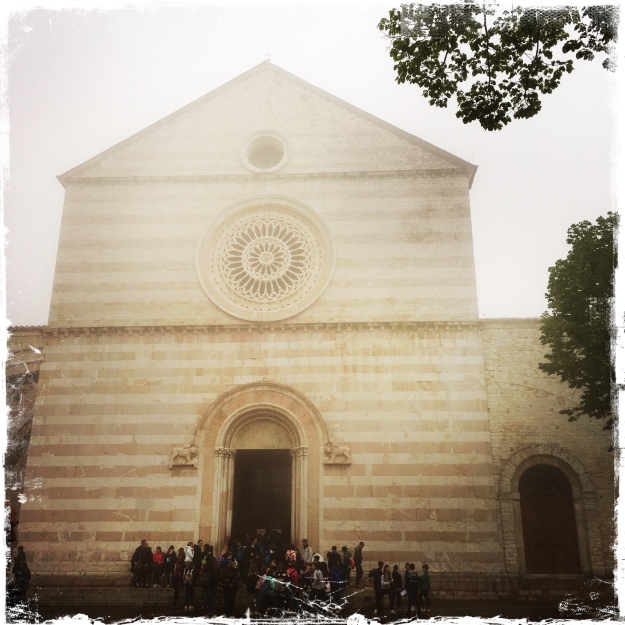 Can’t remember if I mentioned, but we attended a choral performance at St. Clare’s the first night here (below). 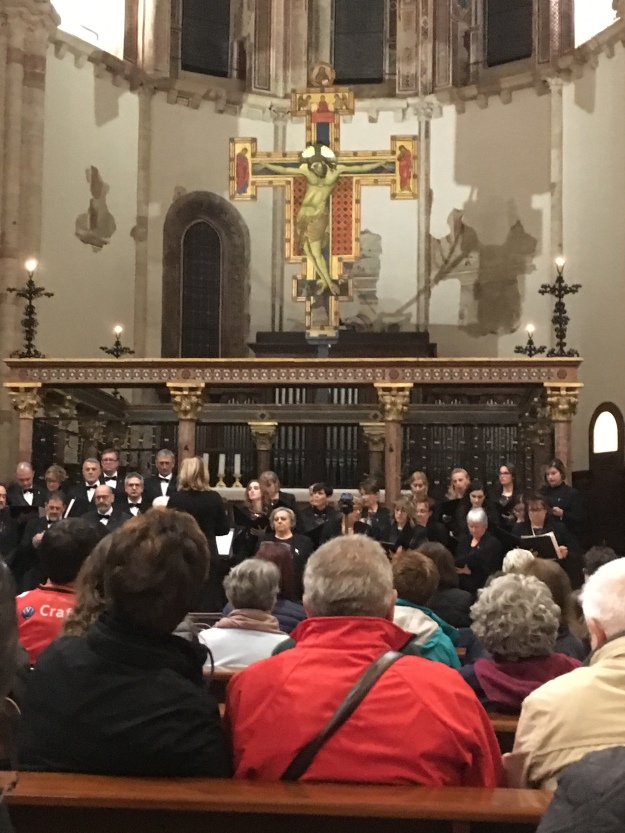 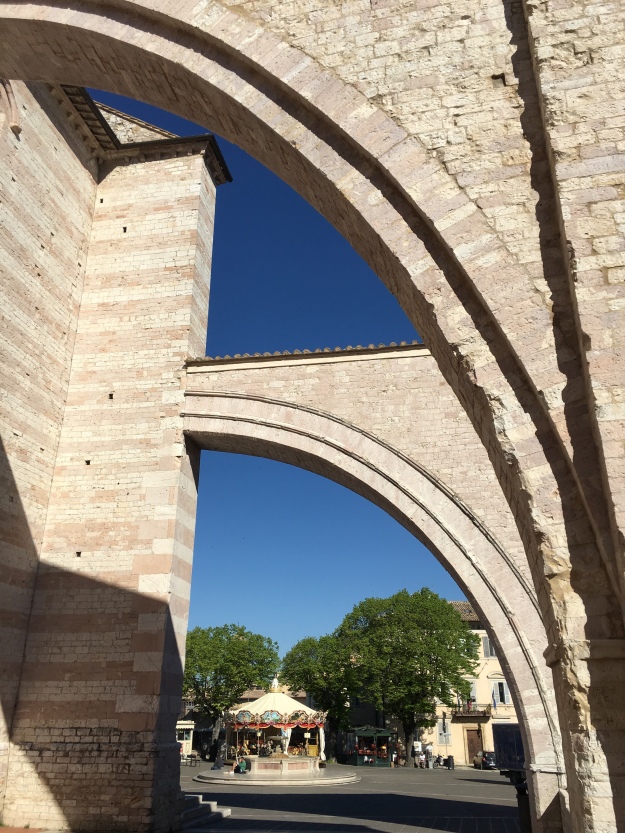