This morning, I went looking for an old poem about winter dusk and didn’t find it. The collection I did find reads mostly like a testament to childhood trauma. But at that time, I didn’t really know. What did the professor think? And, was a decent typewriter so hard to come by?

Don’t know how this picture below could possibly be considered a self portrait, but it’s labeled as such. 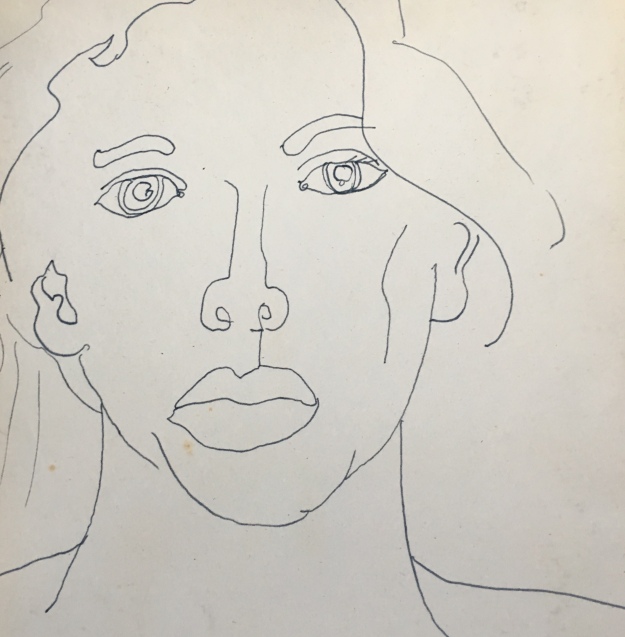 And here is a tender shot of my sister and me which was inserted to illustrate a poem about my first recalled nightmare. 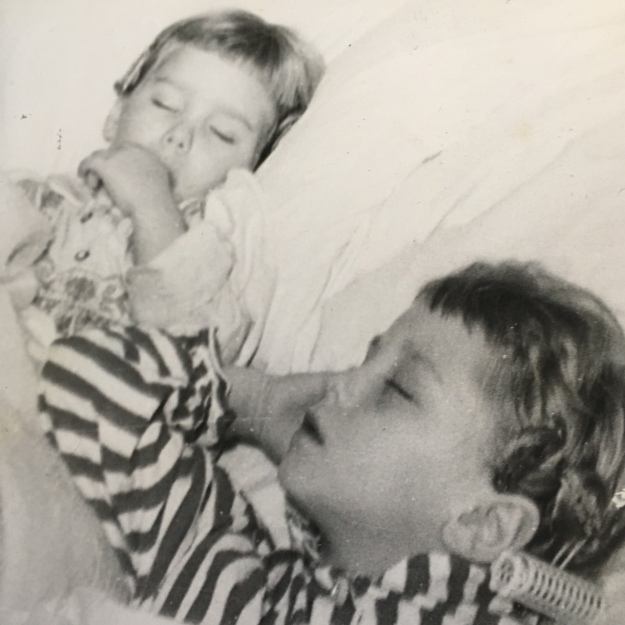 In the dream, a dragon chases my sister and me. Running on a stone floor. Hiding behind a giant urn after my sister peels away. It might’ve been dreamed in this very bed. Notice the curlers!

Finn and I made two neighborhood circuits today. After the stretch along Route 9, which inexplicably I like to walk now and then, a homeowner near the corner places his fourteenth full bag of leaves on the curb. Behind him, a child carries a still-folded bag. It is almost as big as he is.

On Lantern Lane, there was Jane, whom I haven’t seen in years, heading off for a run. It’s strange, the not seeing, because I walk this stretch of road many times a week. We are too far away to attempt a greeting. She looks back briefly. Does she even know we have a dog?

On Jackson, a slim young man wearing a yarmulke rattles by on a skateboard, reminding me of Danny — the lean frame, the love of motion.

It warmed up considerably today.

Near White Ave, Tony the dog-biscuit-dispensing mailman crosses the street — too far to force an encounter. Finn disagrees. The dog pauses to put both feet on the corner house’s rock wall three separate times. He stares with avid interest in Tony’s direction.

Just before home, a black dog we don’t recognize turns off of Cypress and slowly makes its way toward our street in front of us. I have to stay a certain distance behind. They are soooo slow! Then there is pooping. Will the bag ever come out, the walk resume? They come our way. I manage to still Finn’s reaction without a treat.

The dog looks as though she could be Finn’s sister. The woman with her (a dog sitter) and I talk about it while Finn assumes a sphinx-pose and looks on. I’ve never seen him do anything remotely like this in this situation.