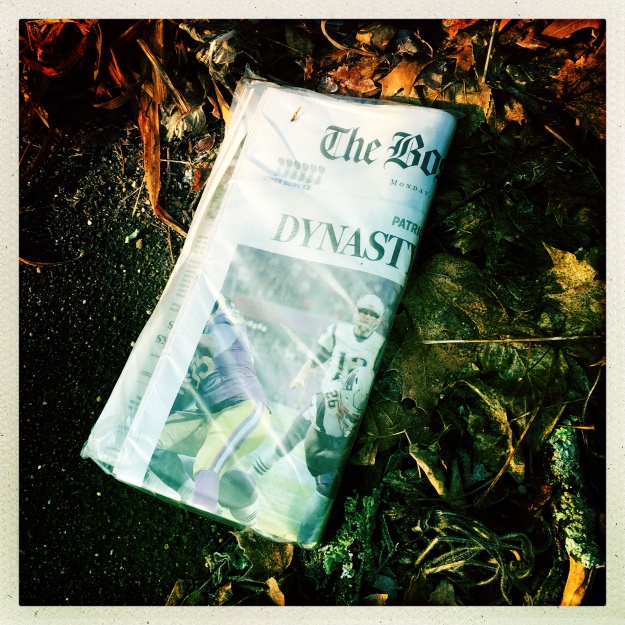 Here’s the second and last football poem of the season. The rules are simple: phrases are jotted down when they grab the ear, no words can be dropped or added in each phrase, and they must appear in the order they are uttered. I don’t require that I use every phrase, but in this case, I did. I have no idea what a lot of these words mean in the context of the game.

How are they gonna double-team him over and over?
There was pressure coming up the middle.
If you get vertical, you can hit them on the way by.
From the 80’s, the way they line up.
Knocked down after a couple —
there was nothing there.
Safeties
A little guy in Hogan
Holds him to two.
Don’t let him bootleg!
Right now he can’t tell the difference between man and zone.
He’s twisted out.
It’s almost laughable —
inside, outside, incomplete.

It gets tougher and tougher —
who’s on who?
They made it look different with motion.
A perfect window,
The brigade.
That grizzled veteran right there
rode ’em quickly.
I’m a little hesitant
other than those sacks
somehow comes downhill.
They made you look this way,
then brought it right back at you, toe to toe.
Look at them both create holes.
They stood up over and over.

Blank stare
declined
whispered explanation
put it down
good snap
not in our lifetime.
After the pick, it’s hard to imagine,
nobody can morph,
doubt hovering.
You give him one.
I would take the Hail Mary early,
maybe if you’re fortunate,
at one second.
There it is!
The dynasty.