Yesterday, a friend who is also my writing teacher called from the edge of Crystal Lake, where she sat and needed to talk to someone besides her family. It was in the 60’s and beautiful.

I mumbled about how mask-making was interfering with working on my manuscript — how it was a conflict.

“Dee Mallon?” she quipped. “In conflict?”

I laughed. “Yeah. Who would I be without my conflicts?” 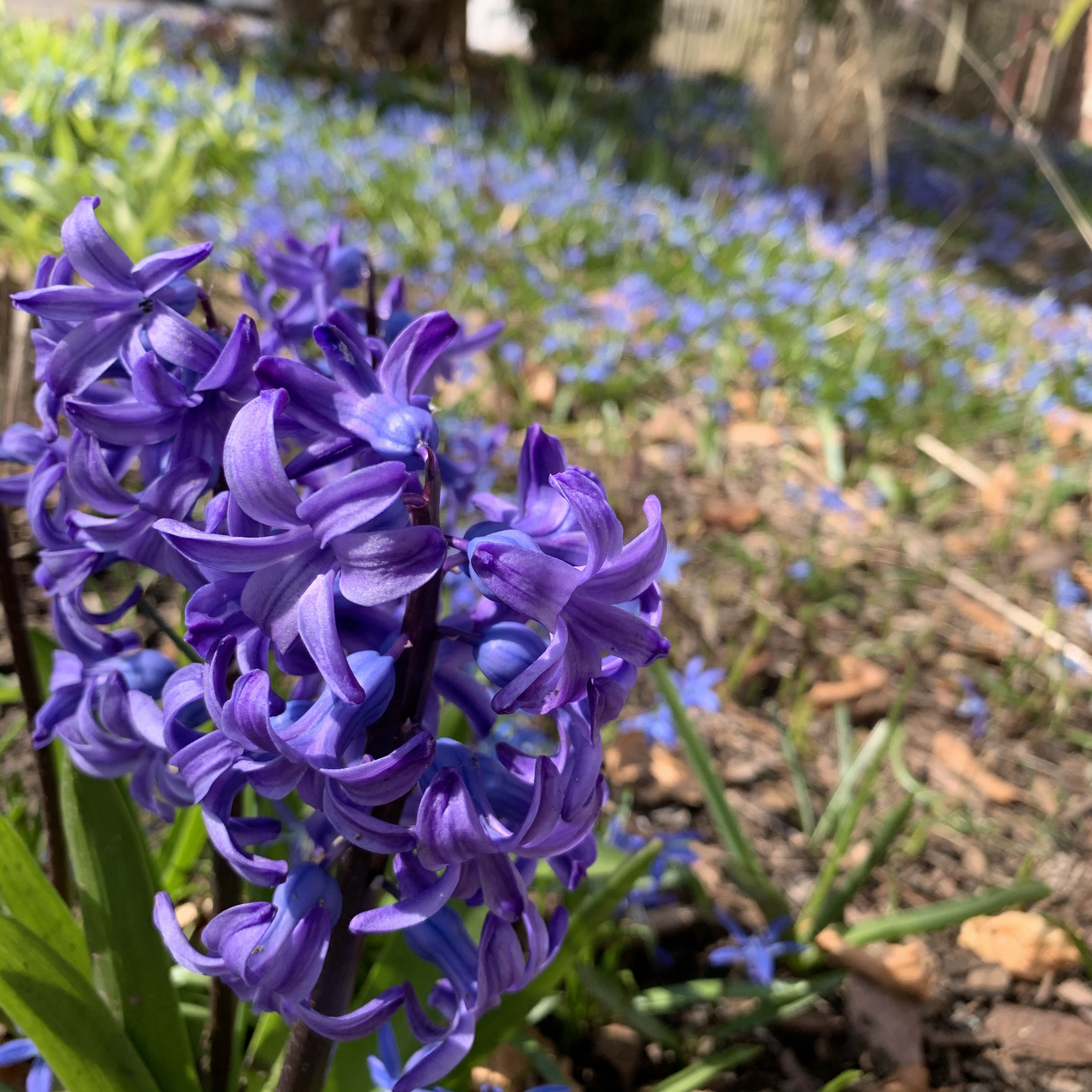 Such good writing is emerging from this peculiar time. One of today’s prompts was to write about homesickness.

Here’s a little of what I wrote:

Out on the street, I would wander in a drapey tank top, necklaced, smiling, hugging every passerby, strangers and friends alike. Heads bent toward each other, the smell of skin every time like going home. … 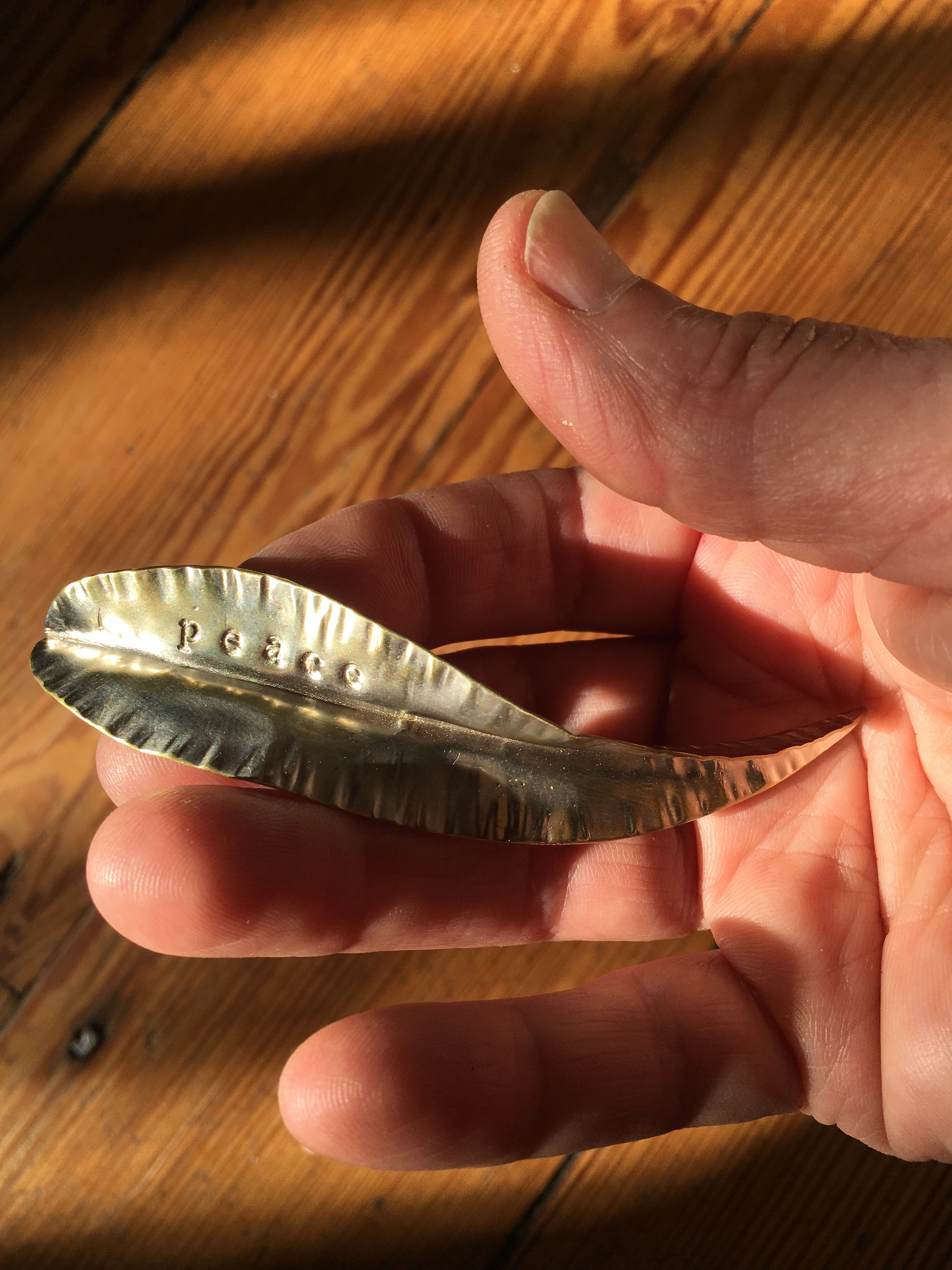 Peace is muscular and requires postage. Without facts, messages of peace are gauzy and limp and when espoused without action, they might as well serve as tombs to defeat. But peace upheld by informed citizenry and expressed by those willing to place their hearts in the hands of the world, shines and leads. Sinewy and generous, that kind of peace has the capacity to inspire and uplift us, even now when so much else sends us in the other, darker direction.

Liz Ackert of Texas is teaching me these things.

One time contributor to the Hearts for Charleston Quilt, creator of the Peace Pin Project and now, the conduit for Peace Objects Extraordinaire, her work to advance world-wide peace is robust and by the way, lovely. Both conduit and creator, she is keeping her friends around the world focused on “Yes” — no easy task. 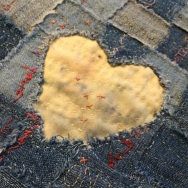 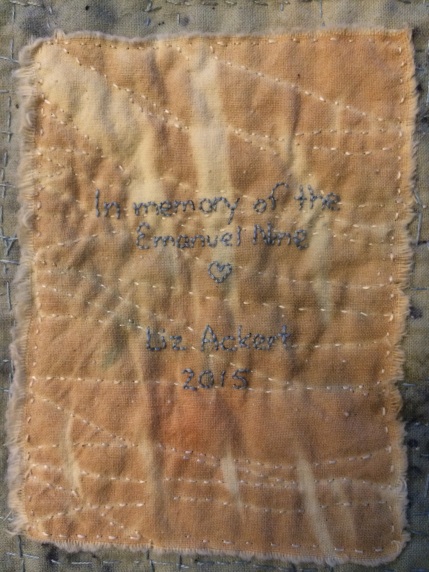 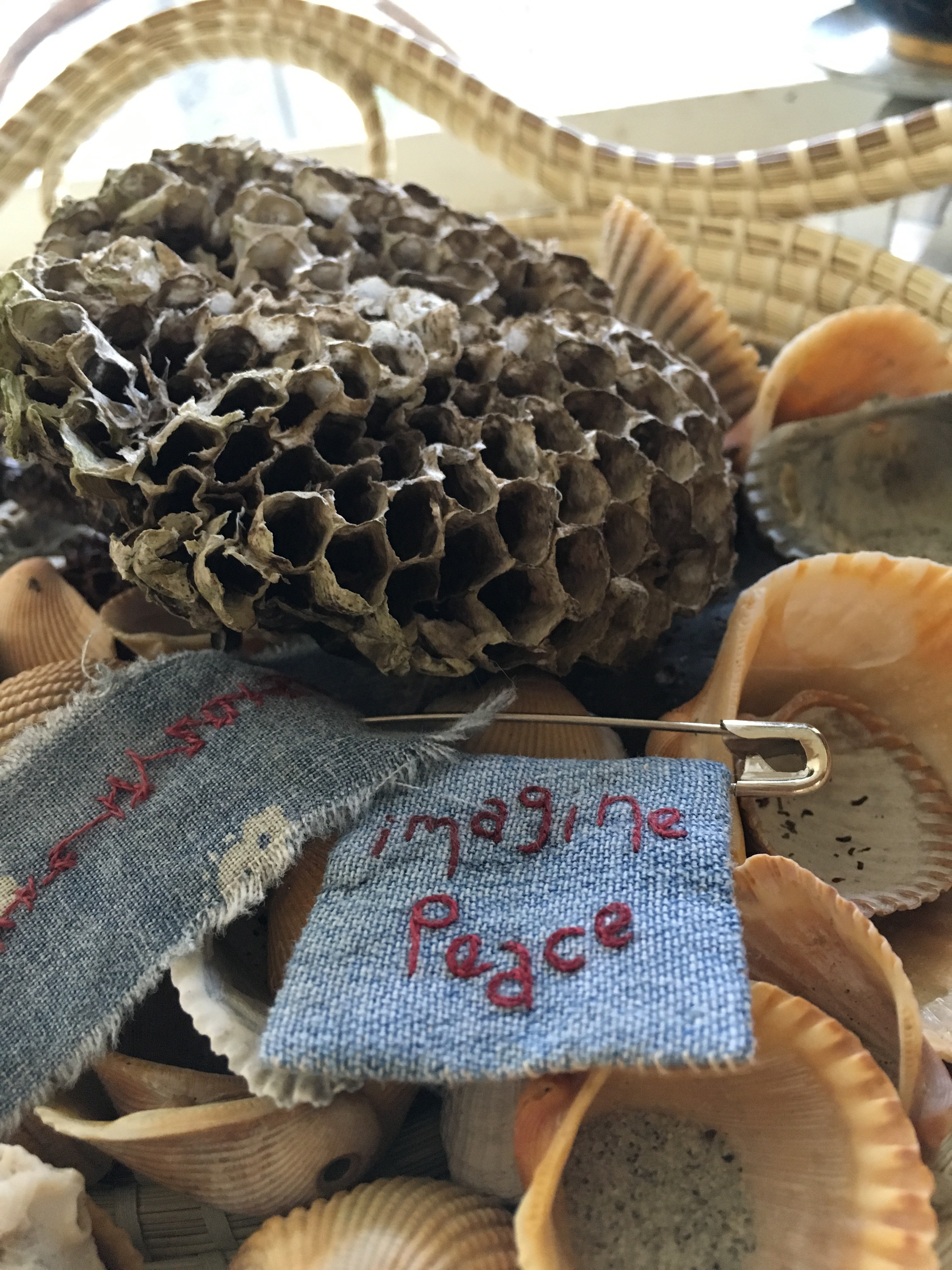 This beautiful leaf was crafted in Australia by Barry Smith. You can read more about him and it on Liz’s blog, Mo’s blog and at the artist’s blog.

Liz sent one of these leaves to each of the Hearts for Charleston quilters, reconnecting us in a kind of devotional and aspirational network. It feels good to revive that group specifically. It feels good to be connected, generally. And, as with the Peace Pin project, it feels good to be warmed by Liz’s shining example of what I’ll call ‘aesthetic activism’. 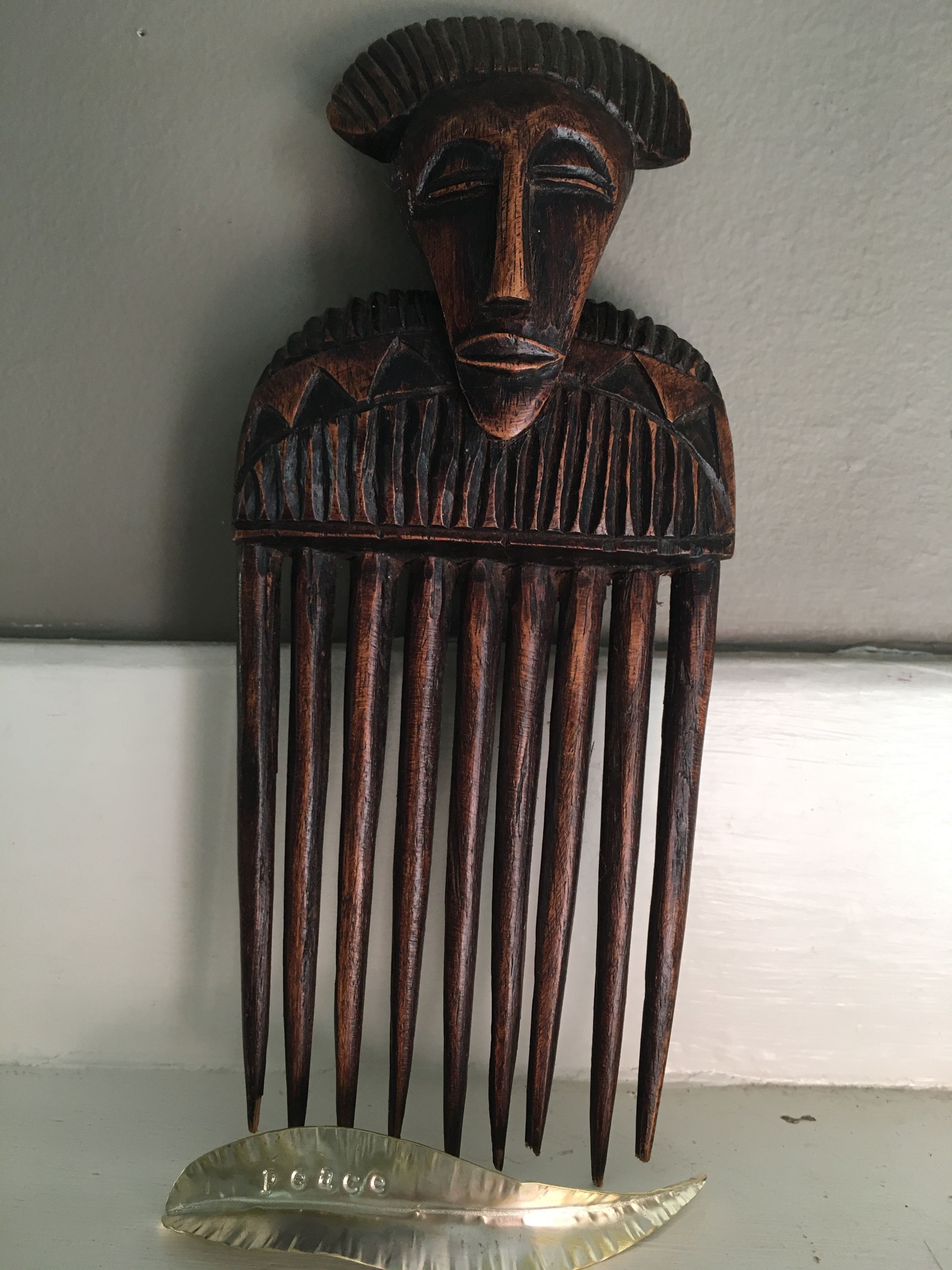 When I think about Naomi Klein’s wise thesis that it is not enough to resist anymore, I’m often stymied. Saying NO takes so much energy! There seems to be more and more to say NO to! Where is the way out or forward and where’s the energy to go there? To define and uphold YES?

Liz reminds me that positivism can begin at home. She reminds me that it can be launched with a simple idea, a sheaf of stamps, and a gift-giving impulse. The way her gestures resonate literally around the globe is testament to the nature of love, to the artistry possible while envisioning a better future, and to the power of connection.

And of course, getting gifts in the mail is nice! 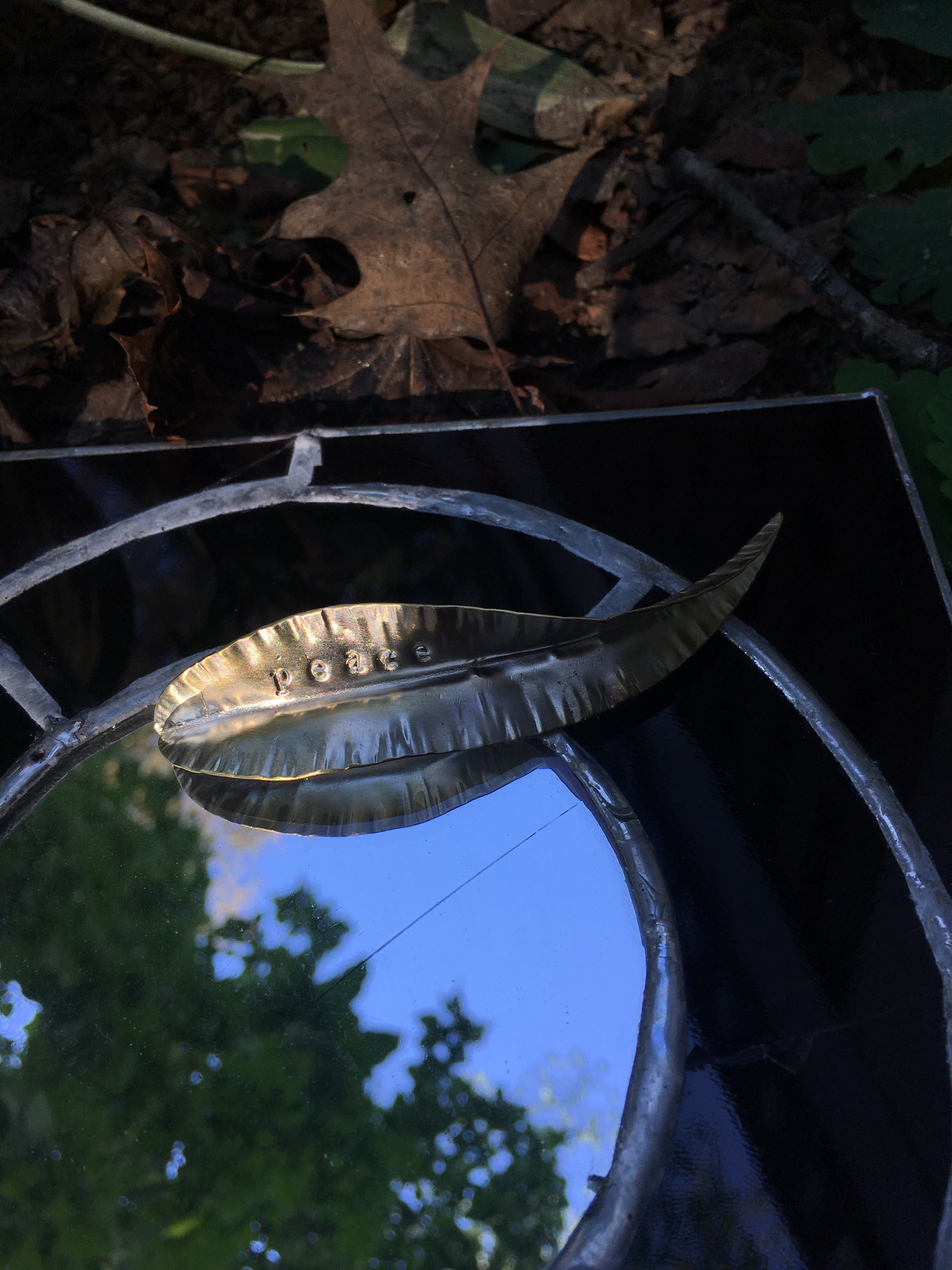 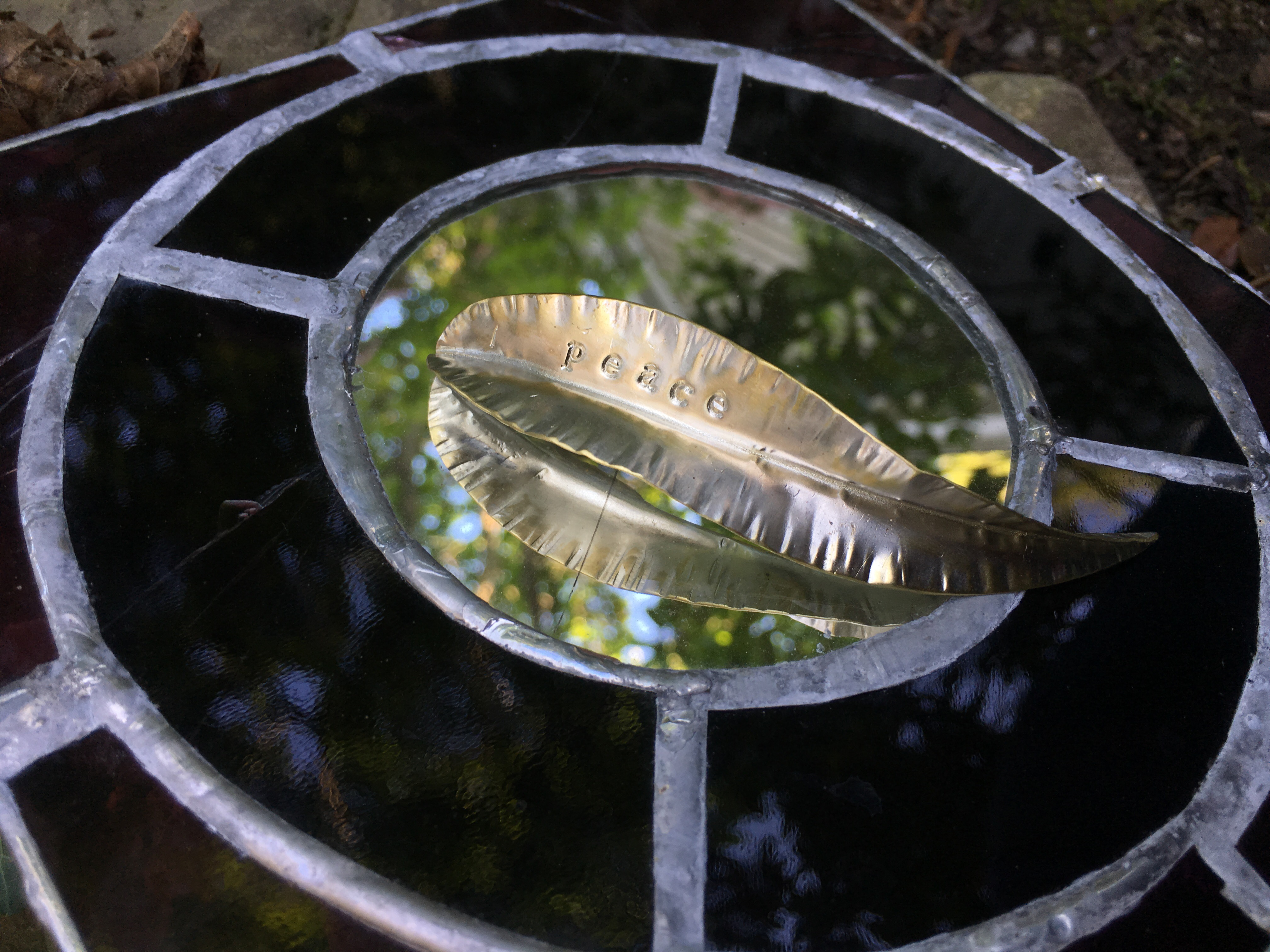 The leaf came wrapped in silk that Liz hand dyed with Brazilwood (true to form, I can’t locate it at this very second — it’s probably lounging & gossiping somewhere with the white silk sent to me by Mo).

A beautiful letterpress piece by Fiona Dempster of Australia was also enclosed. It speaks to the energetic nature of peace. 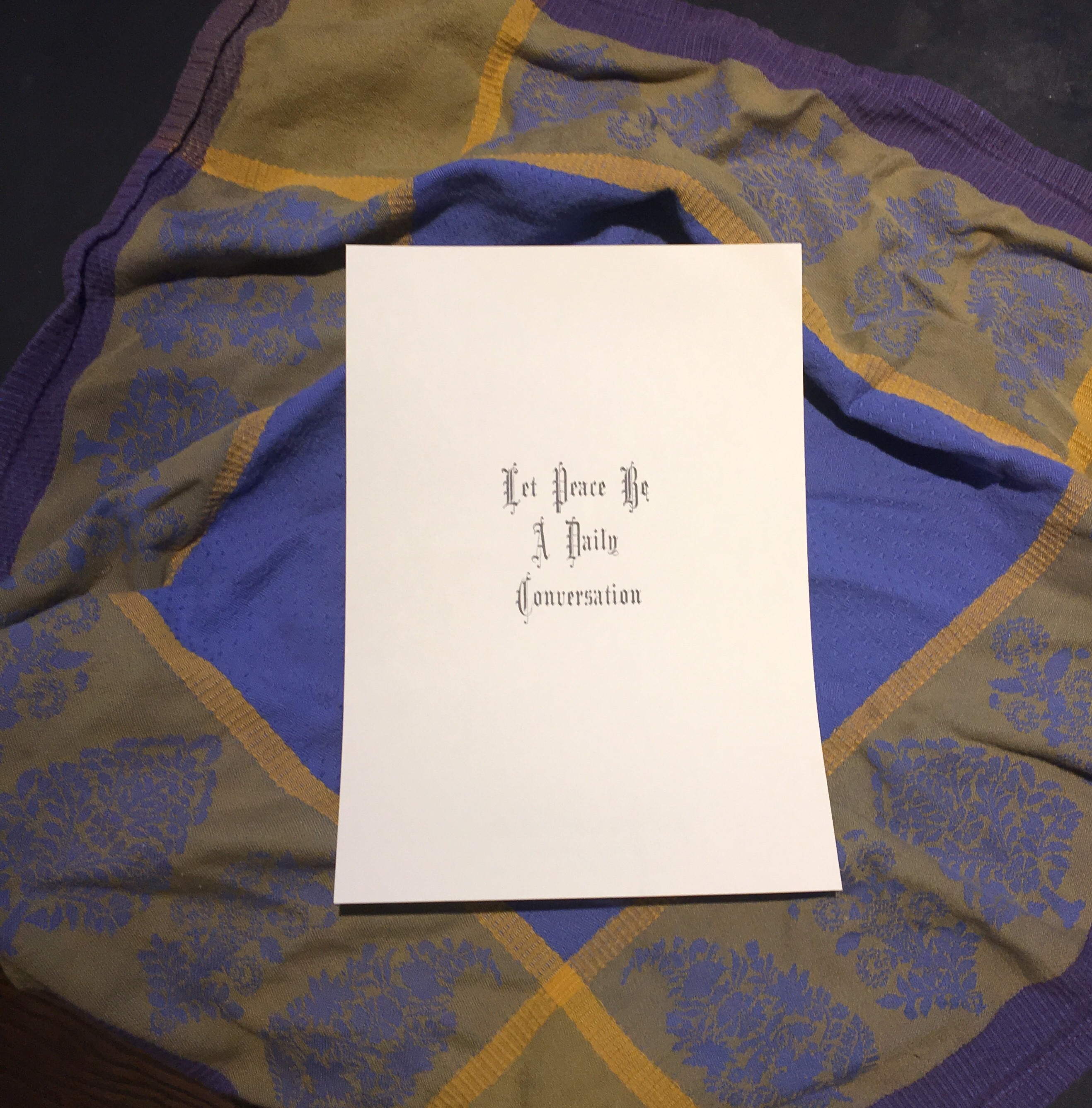 Liz’s cover card, itself a work of art, offers inspiring words and a sense of occasion. 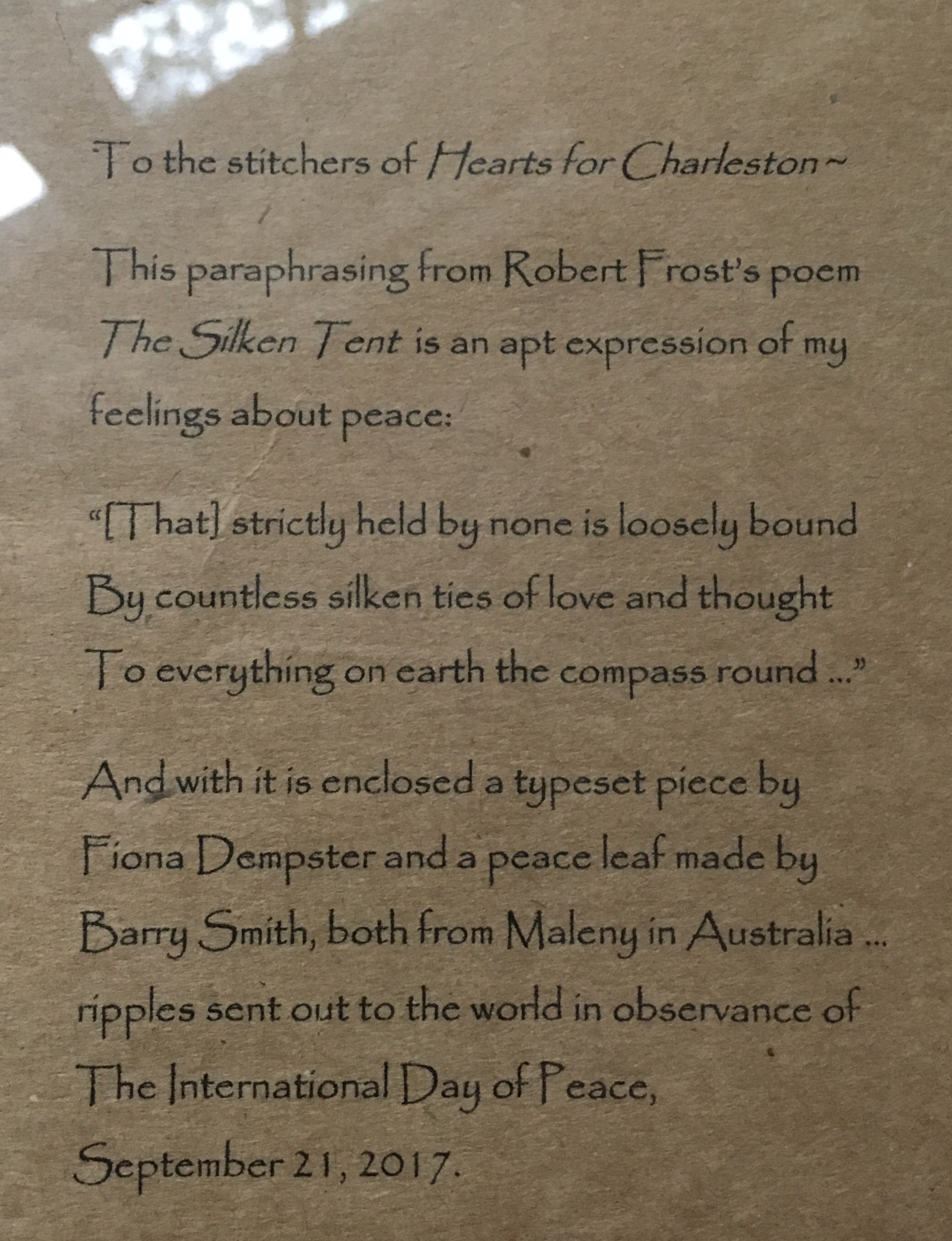 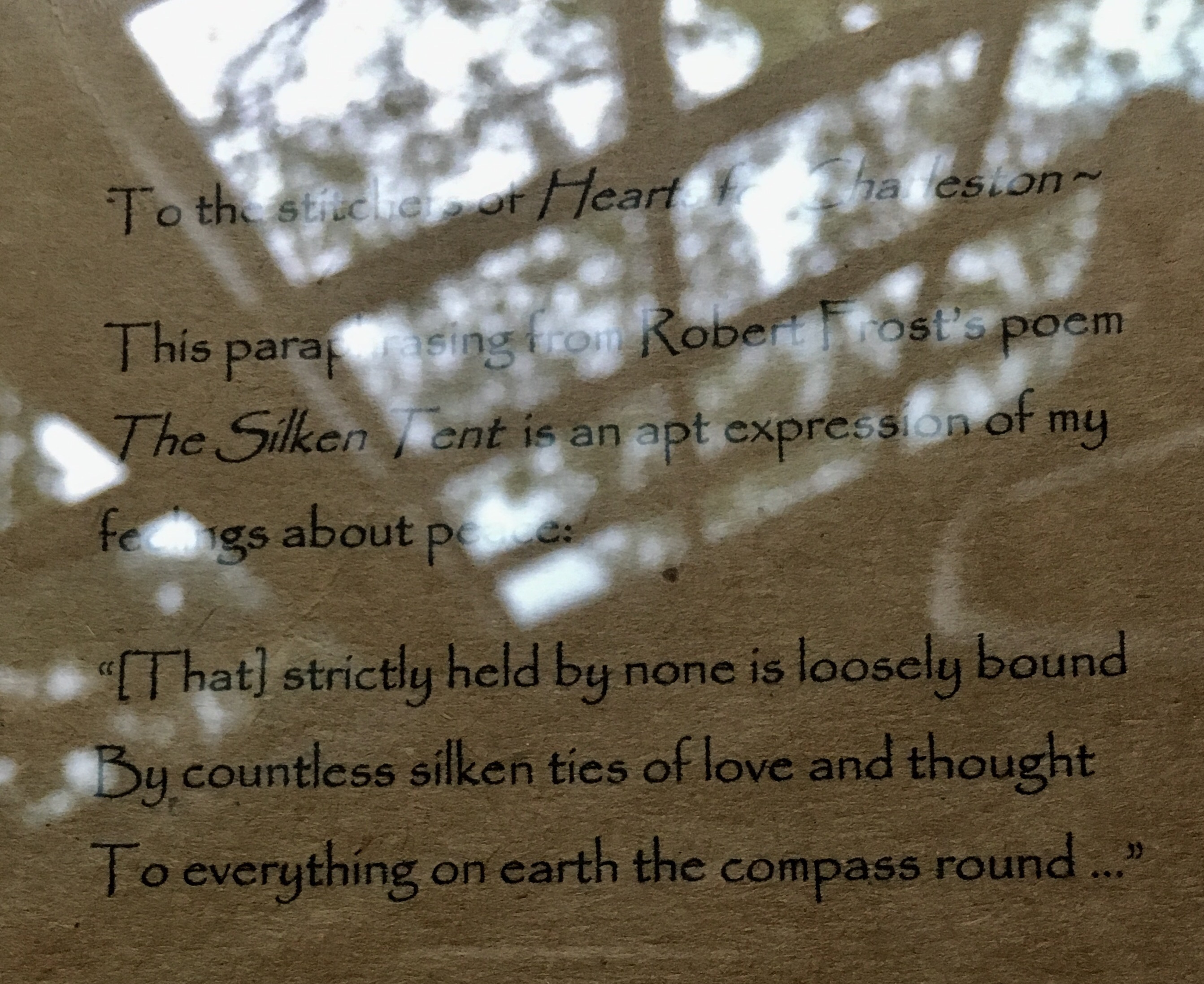 Liz is literally and figuratively ‘loosely binding us in silken ties of love’. How powerful a gift this is! Thank you, Liz — please continue!

One of these days, one of us will be the 100th monkey…

(Notes and collage from last week):

Well, after many days working outside at a garden site and shuffling school forms around, calling guidance counselors, dropping off forgotten track items to the high school, ETC.!! , I have been downstairs, which is to say, in my studio.

So, what to do?  Force myself to finish before I play?  Just stop binding my pieces?

That last option is not a bad alternative at all.  Arlee, whom I discovered both in various flickr pools and in this month’s Cloth Paper Scissors, showcased a beautiful quilt with texture galore and unfinished, tattered edges.

The collage above was one of the pieces I made when I perhaps should have been finishing other things.  The text is printed on linen and on fake vellum — both fed through an inkjet.  They are scraps from my quilt, “Valentine to Iraq” (below), made some time ago.  I made the off-white paper with newspaper inclusions while teaching a UU religious ed class a couple of years ago.

This quilt was coming together as the American death toll in Iraq reached 3,000.  I originally planned to stitch 3,000 “x’s” on the quilt, representing the final kisses of mothers to their never-to-return soldier children, but stopped at a little over 1,000.  It gave me a sober appreciation for how large a number 3,000 is.  And now, of course, the toll is much higher.  And we’re not counting Iraqi deaths.

This is a chop-and-rearrange piece — some areas, therefore, have as many as six layers of fabric.  I’m not sure this is technically a quilt, because there isn’t batting behind every single square of this piece, which is mounted on felt.

The X-stitch-kisses at times resemble sutures.

Crucifixes found their way into the piece, representing the enormous sacrifice both the soldier and his mother make (and his father and other family members/or her — forgive me, as a mother of two boys, this piece references our genders). 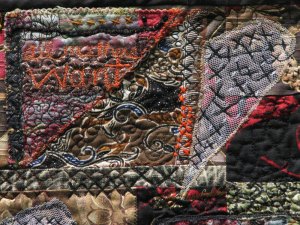 Here, half a heart is depicted, meaning what it is — a broken heart. 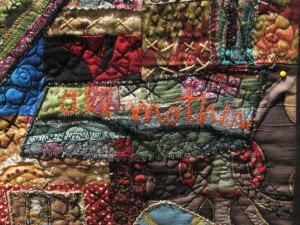 Another heart fragment, covered in kisses/sutures.

I wanted some of the embellishments to take on the look and feel of maps, or again, the edges of wounds. 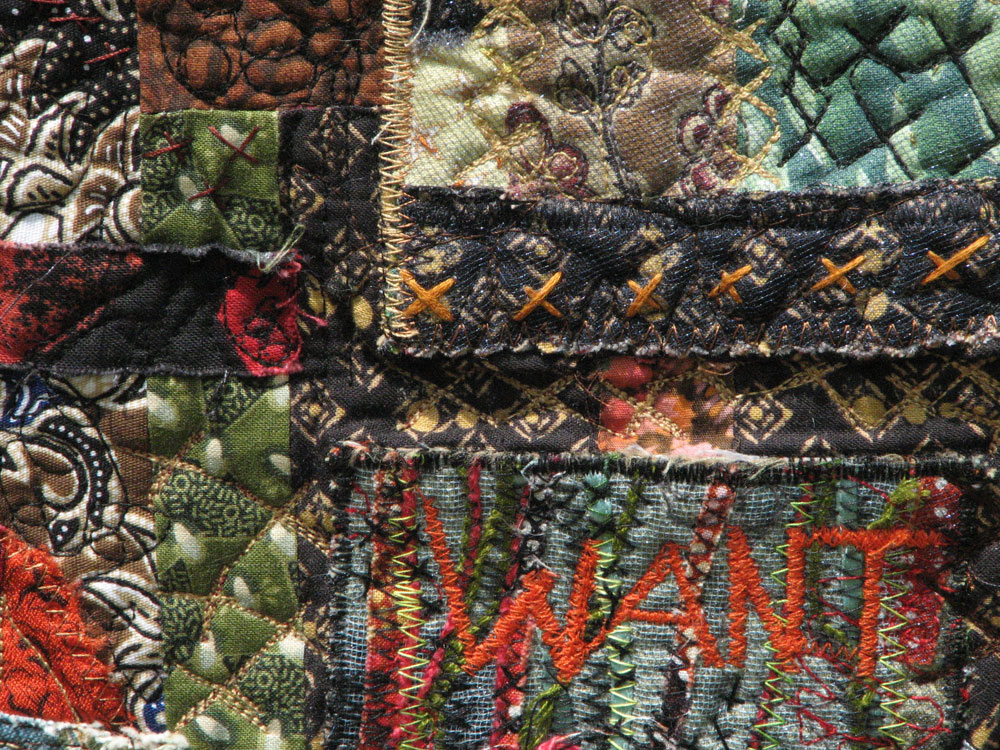 Here you can see how the varying thicknesses relate to each other.